So, Your Life Isn’t Fair? 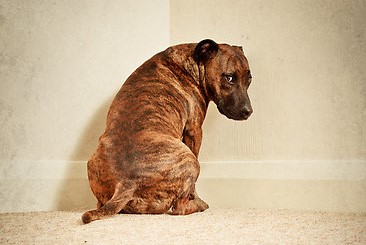 The Roman Emperor and Stoic philosopher Marcus Aurelius was in no doubt that life isn’t fair. He wrote:

When you wake up in the morning, tell yourself: the people I deal with today will be meddling, ungrateful, arrogant, dishonest, jealous and surly. They are like this because they can’t tell good from evil. But I have seen the beauty of good … And so none of them can hurt me. No one can implicate me in ugliness.

Because of passages such as that, Marcus is sometimes accused of having a low opinion of his fellow human beings and of the potential of humans to live a good life.

Nothing could be further from the truth.  The key point he was making is in the second half of the quotation.

Marcus was arguing that, irrespective of how well we behave, we cannot count on life, or on others, to treat us well.  That is just reality. However, we must try to rise above perceived unfairness.

For Marcus, the potential of humans is seen when we rise above things when other people, or life in general, does not treat us well. But we tend to forget this very easily.

It would be a bit of a waste of time for him to have argued that we should do right when others are good to us. That’s easy.  People will generally respond well to others who are nice to them.

But what should we do when life does not treat us fairly?

Good people who help others get cancer and die young while criminals remain healthy. Poorly qualified people who put themselves in the right place do well while others work hard to survive. Talented writers often struggle and sell fewer books than other less talented writers who pump out pulp fiction. Some children are born into poverty while others are born into affluence.

This has nothing to do with how these people behave to others or how others behave towards them.  It’s how life in general treats us.

The fact is that life is neither fair or unfair. Of course, some people will have good fortune while others will suffer. That’s life. But, we have come to believe that life should be easy. And then when we find that it is as it is, we claim that life isn’t fair.

How we Define Fairness

The problem may arise from how we define fairness. The most common idea of fairness that people express is actually better thought of as an expression of self interest.

People like to have the ability to refer to moral authority. They have a sense of right and wrong. We define this morality and then invest the authority in others, in institutions, or in our own opinions.

This is why institution such as referees in sports and judges in courtrooms command respect. We assess the world through this prism.

So far so good. But then we expect the world to comply with this view and reward the good so as to be in keeping with our idea of right and wrong.

But the world cares little for our internal balancing of right and wrong. It produces the outcome that it will produce. 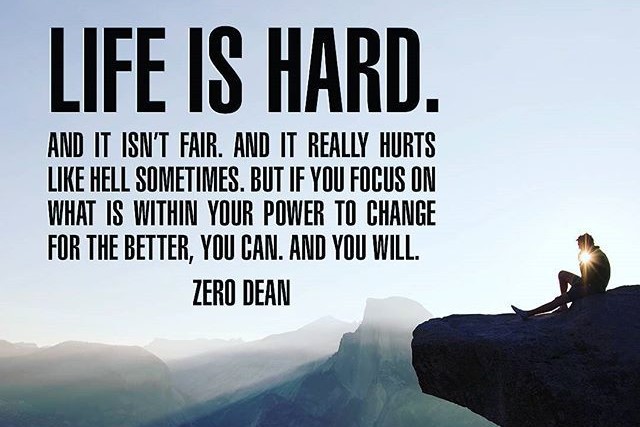 You can study hard and work diligently, but still fail the exam or not get promoted. You love someone, but they don’t even notice you.

There is an obvious problem. We have defined the world according to our subjective opinions. These are infused with our own self-interest. And we then expect the world to produce an outcome in line with this.

The World Doesn’t Respond to Your Wishes

Think about it: what are the odds that you will dream up an outcome, out of the countless possible states of the world, and all the forces that are at work in society will conspire to produce that outcome?

This can be hard to take, but it is very easy to confuse entitlement with fairness. Fairness should only be applied to something over which you have direct control because it involves an interaction in which you are a participant.

Entitlement happens when you perceive yourself as somehow connected to someone with whom you do not have a transaction and you then make a comparison and complain that life isn’t fair.

You have very little control over your surroundings. But most of us emphasise to ourselves the importance of how we think the world should work with the result that we can’t see how it does actually work.

The outcome is that our judgements about what’s fair and unfair are just a case of wishful thinking.

It’s easy to succumb to victimhood even when your challenges are small compared to many. It’s very easy to see life as unfair and give up on dreams. If you fear failure you have all it takes to resort to inaction.

You can be unhappy in your skin, pick at your flaws, wish you had someone else’s curves, or another person’s face. Do that. But you will have a pretty negative life. 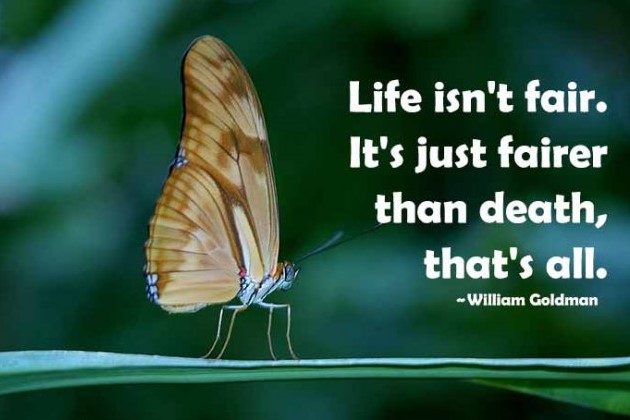 Life won’t back down for you or just hand you what you want simply because you voice your unhappiness with the cards you have been dealt.

If you are waiting for this outcome you’ll need a lot more than one lifetime.

We are ‘social animals’ wired by instinct to copy those around us, to stick with the herd, to stay safe. But the danger with this outcome of our evolution is that we can become trapped under layer and layers of who we think we should be and what we think we should be doing based on how we perceive others around us.

But what if we are basing our perception on shallow appearances? What if we are modelling our behaviors on others surface appearances such as looks and job security? What happens the person underneath it all?

Children don’t seem to suffer from this. They take everyone at face value. But they have very few real interests beyond food, comfort and security.  If these are not met they simply react.

Adult relationships are far more complex. And the tendency to assess, to judge and to try to fit in can be overwhelming.

I look around as I progress through my 20’s and I find it increasingly harder to come across people whose primary characteristics are happiness and positivity. How many people do you regularly encounter that you would describe as being bursting with energy and enthusiasm?

They exist.  But they are a small minority.

However, this small minority of people are crucial life-givers. They leave everyone around them feeling uplifted and motivated. They are the very opposite of self-declared victims.

Because life isn’t fair, you are going to face struggles. Remember that EVERYONE is in the same boat. But it’s how you react that matters.

Why not jump out of bed on Monday morning instead of moaning and feeling hard done by?  Feel privileged to see another Monday, even though it’s much easier to moan.

Why not look in the mirror and find one thing nice about yourself. You have been blessed with your body, but isn’t it so much easier to pick at all those flaws? It’s not fair after all, is it? 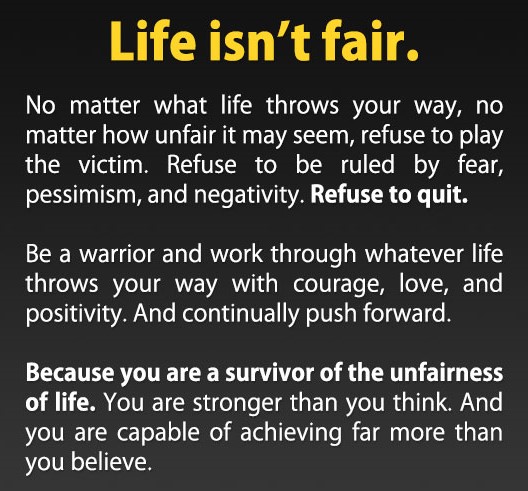 Moaning and making comparisons, wishing for someone else’s life is just a way of insulting yourself. Instead, learn to love yourself, even on bad days.

Live each day in the moment. Appreciate what you have and take it easy. Stop chasing money and chase experiences. You have everything you need, and more.

Lack of Sleep, your Body and your Brain
Small Steps to a Better You
Questions to Fall in Love By
A Simple (but not easy) Formula for Success